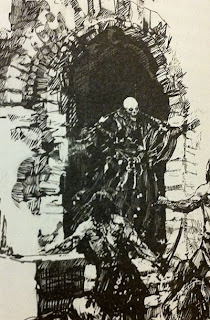 Vloxaxis was the name of the Dragon. Joshua remembered it in his dreams. Kergil the Dark Dwarf cursed Tris because he was bad mouthing his people. They stumbled upon a wide hallway where Dark Elves and Dark Dwarves were battling against each other. The Dark Elves had the upper hand, but Grunka's Company lead them to a grisly end. Stinky added to the chaos and death by ripping out the eye of one of the Dark Elves. The group looted off of them some poisoned weapons, and leather and studded leather armor that cast Cure Serious Wounds once per day.

They found hyenas on short chains that they guessed travel with the Dark Elves on patrols. Joshua was able to cast Speak With Animals and talked to the Hyenas. Joshua turned them, and they started serving the group instead.

In the next room they found 10 blackened iron cauldrons where Dark Elves were bathing in strange liquids. They unleashed the hyenas in the room, but the cauldrons were too high for the hyenas to attack them. Underneath the cauldrons were small black spheres that were generating heat. They dumped out one of the cauldrons and a naked Dark Elf spilled out... to be chewed apart by the hyenas. Another cauldron was spilled out, and then the spells started flying at the party. They were able to interrupt the spells of many of the bathing Dark Elves, and Joshua cast Silence on a bunch of them. In the end they stood over the corpses of all of them, and got a few poisoned scimitars out of the piles of clothing at the base of the cauldrons. The clothing was very fancy, and they found a good amount of coinage. They also found 10 sets of Elven Boots (100% Move Silently).

A bunch of the cannibals came up from behind them, and they seemed to be immune to the Sleep spells that they cast on them. They managed to kill the ones that came into the room, and closed the door before more came in. They piled up a bunch of Dark Elf corpses in front of a trapped door, and a Dark Dwarf then let them into another room. Joshua cast Putrefy Food on the corpses to hopefully poison the corpses. The cannibals came pouring in to feast on Dark Elf flesh and the trap killed them all. Silus the sickly fell in combat...

The Dark Dwarf guard told them about some of the stuff going on in the dungeon. They learned that Kornas (the younger Minotaur brother) was probably located nearby.

They encountered a Dark Elf creepy guy wearing stained brown robes standing in a pool of ichor. He had some powerful abilities that didn't seem to be spells. He was able to turn into sludge, and turn into a brown mist that could control those that walked through it (and failed their save). In the end Sinjen through a torch on the Dark Elf's robes and burned them. This seemed to kill the creature. The mist animated some of the Dark Elf corpses. They fought 3 more Dark Elves with crossbows, and then looted the chest in a nearby room. They found a bejeweled floating spellbook with some powerful spells in it and lots of coins.

They healed up and rested, and then went to the frontier of the next Dark Elf area. There they found what they assumed was a dead Purple Wyrm that was in a long hallway with it's mouth spiked open. The digestive juices inside the Wyrm ate through the boots they were wearing. They spiked the mouth shut, and squirmed over the back of the creature and had just enough room to crawl. When they crawled they heard digestive juices spraying inside of the belly of the creature. They heard someone screaming inside that was speaking Elvish, and then a blade stuck out of the back of the Purple Wyrm at the crawling adventurers. They moved around more and they believed that the digestive juices were killing those Dark Elves inside.

They got to the other end of the Purple Wyrm and it's anus was spiked open. It had a poison tail but it was very weak. They saw a Dark Elf with a guard by it. Thimple killed it under the cover of a Silence spell that Joshua cast.

Twelve human slaves holding slaves, a giant hawk with its wings severed off were being prodded along with two Dark Elves that were holding wands. Abraham let them all pile into the Purple Wyrm, but the wingless Hawk turned around and was standing guard. The slaves and 2 Dark Elves died horrible deaths inside the belly of the Purple Wyrm. A lightning bolt was cast inside before they died and blasted into Blevins.

They attacked the wingless hawk next and it seemed to have acid for blood and a nasty serrated beak. It didn't last long, and crumpled over bleeding acid everywhere.

There was a room with a hidden lever. Inside a spinning mess of traps was protecting floating gems with spellcasters caught inside them. There was an emerald, a ruby, a diamond, and an opal. COLLECT THEM ALL! ;)

In another room they found an animated crystal statue with four arms and wielding poison short-swords. It seemed like it was guarding a doorway to another room.

They retreated to a safe room and then held up for the night.